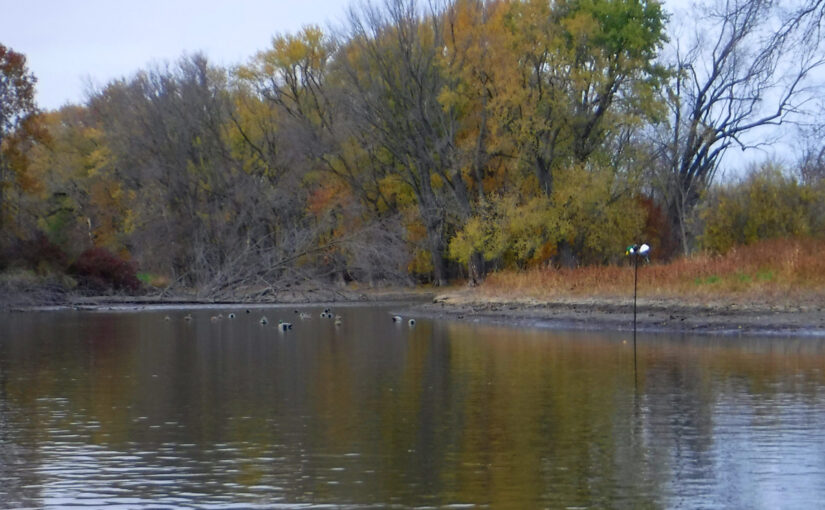 Our previous plans were thwarted by Covid and non-Covid issues, so we made a last-minute decision to go to the Rock for a late-afternoon paddle.

Thwarted Plans (what we didn’t do cuz Covid)

We had initially planned to get an early start and drive to the Wausau area to do a first-time paddle on the Chain of Lakes, followed by a visit to the Leigh-Yawkey Museum to see their annual “Birds in Art” exhibit, followed by a stop at Weber Farm Store in Marshfield to get Blue Marble Jack Cheese to take to a grand-niece for her sixth birthday the next day.

First, a Covid exposure caused cancellation of the party.  Then the museum announced it was closing as of the day of our planned trip due to the spiking Covid cases. By that time we were beginning to wonder, since the day was predicted to be gorgeous, if it would be impossible to find parking at our intended put-in at Knight’s Lane Landing. And once on the water, would we then encounter wall-to-wall kayaks on Marl Lake.

With one of us not feeling up to par anyway, we decided we would scrap the Saturday fun and paint the patio swing instead. The following day we planned to reward ourselves with a leisurely Sunday drive to the cheese store sans canoe, enjoy the foliage and do reconnaissance at Hartman Creek State Park and the Knight’s Lane Landing area – until we realized the Weber Farm Store was closed on Sundays! So much for well-laid plans, but last-minute outings can be fun, too.

We started at Kaul Park on County Highway W, east of Watertown. It was a colorful drive on County TT and Highway 19 through Marshall and Waterloo with fall foliage approaching peak in Jefferson County. There were many tRump signs in evidence, but we tried not to let that bring us down.

We felt bad that our decision was made so late in the day that Gene could not go with us as planned. Katia, who is becoming quite adept at loading and unloading her kayak single-handedly, did join us which was nice.

It was windy and cool and mostly overcast. Despite wind speeds around 12-14 mph and temps in the low 60’s, it was a fairly comfortable paddle and we didn’t get pushed around too much. Many of the trees had already lost their leaves and, as expected, there wasn’t much fall color on the river.  There are boat launch put-ins both north (Harnischfeger Park.) and south (Roadside park with oxbow) of Kaul Park for a shuttled paddle. This time we did not shuttle because by the time we made up our minds, we had no time for that!

We realized it was duck hunting season when we came upon a flock of floating duck decoys and a couple of hunters in a blind across from them. We never heard any gunshots, thankfully.

This is not a no-wake waterway but we rarely encounter big boats to contend with. But this time a fishing boat was approaching fast enough to swamp us. Luckily the driver, who had a nice black dog on board, slowed down just in time. We think that having someone floating beside us in a bright yellow boat is quite helpful!

About a mile upstream we met a couple of kayakers who had come from Harnischfeger Park. They said they had been paddling for about 2 hours, helpful information for planning future trips.

All in all, it wasn’t the most beautiful or interesting paddle ever, but it was good to be outdoors and getting some exercise. Although we hope it is not, this late in the season, Rock River could very well be our last paddle of the year. 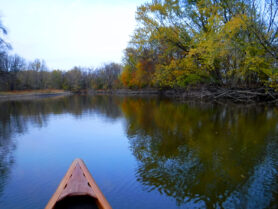 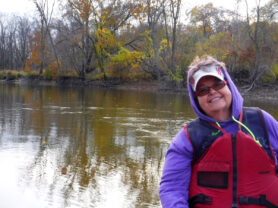 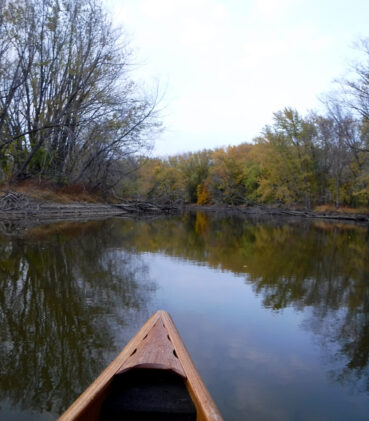 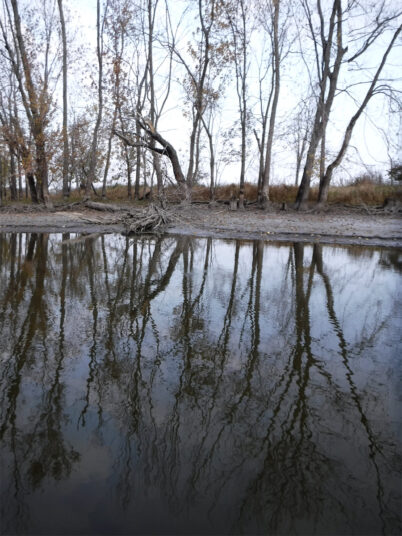 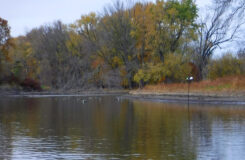 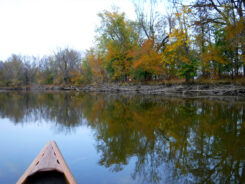 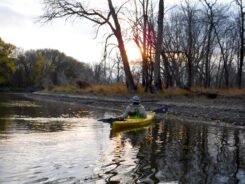 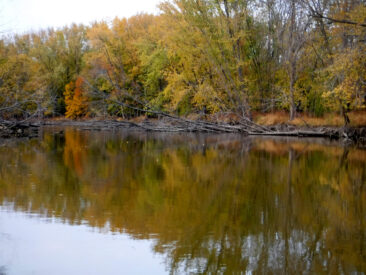 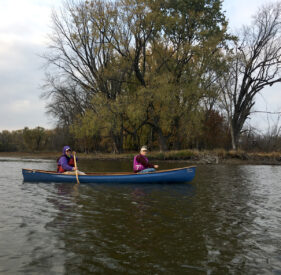