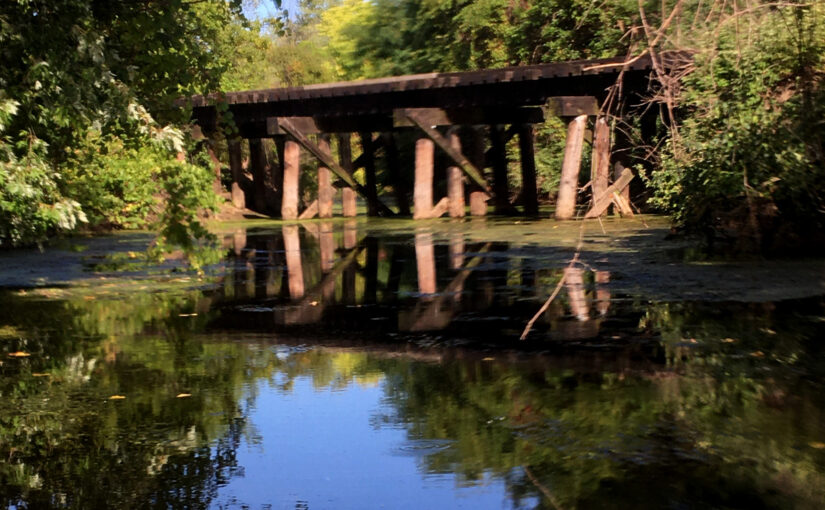 Another paddle between two lakes in Madison. The water can get too low or too much algae but on this day it was good enough for the likes of us!

The two of us in our canoe and Katia in her kayak paddled from Olin Park to Lake Wingra on a temperate Sunday afternoon, a nice respite from many days of oppressive heat. Lots of people had the same idea. Despite the lack of rain in the past several weeks, water levels were adequate although current was quite sluggish, favorable conditions for duckweed and algae to accumulate. However, it was good to be on the water and introduce our friend to this easy urban paddle.

Olin-Turville Park has a nice dedicated concrete ramp for canoes and kayaks that is separate from the motor boat launch. A launch fee is not charged for boats that don’t require trailers. Most of the parking is reserved for vehicles with trailers, and there was only one open space in the whole parking lot, which we gave to Katia since she has a broken foot. I had to drive out of the parking lot, cross the bridge over the creek and parallel park along the side of the road. It would have taken no time at all if I had skipped the step of searching for an open spot in the lot.

Water level:  There is no gauge on Wingra Creek. When we want to paddle there, we simply drive over and eyeball it for flow and muck factor. Set your GPS to: 599 W Wingra Drive, Madison. Park, walk across the pedestrian bridge, go right for about a block to check out the area under the first arched stone bridge. If there is going to be trouble (low water, high water, blockage), it’s going to be there.

Round trip for us was 2.5 hours at a leisurely pace. It was not difficult to paddle through the duckweed, but there were some sections near the Arboretum that slowed us up due the thick layer of algae; it’s even harder for a kayak to power through. The water itself was quite clear, and we could almost always look down and see hundreds of small fish swimming through the underwater vegetation. The creek can be rather trashy, but we saw very little this day, which is probably a credit to volunteers who work hard to keep the creek clean.

The turn around point for this route is a dam at the bottom of Lake Wingra. To go further you need to “go up a step”. There is an awakward place to portage – a sign says “get out” – but at that point we are ready to turn back around anyway.

The many bridges on Wingra Creek are lovely, and there were a number of bridge fishermen, including one who had shed his clothes down to a Speedo and was in the process of swimming across the creek to free his line from the opposite bank. We weren’t actually aware of what he was doing until we found ourselves “clothes- lined.”

We also exchanged greetings with a man and his young son who were fishing from the Arboretum Drive bridge on the downstream side. When we came to the bridge on the return leg, we met them again on the upstream side. I told the boy I had seen his twin on the other side of the bridge earlier. That got a little smile from the boy and a big laugh from the father.

We saw gazillion small fish, one big catfish or carp, a pair of noisy kingfishers, sparrows, cardinal, dragonflies, mallard ducks which didn’t seem at all bothered by paddlers, painted turtles, green heron and a stately great blue heron perched on a branch near the Wingra Dam. Unlike most heron we encounter on our paddles, this one was very tolerant of our presence and posed nicely for photos.

We forgot our usual point and shoot camera at home. Mary carries her cel phone on a lanyard in plastic “life preserver” / dry bags so this time she shot photos through the plastic. It turned out better than expected but there is some blurriness that we think we can improve on in the future. For more, see our previous pictures of  this Wingra Creek paddle. 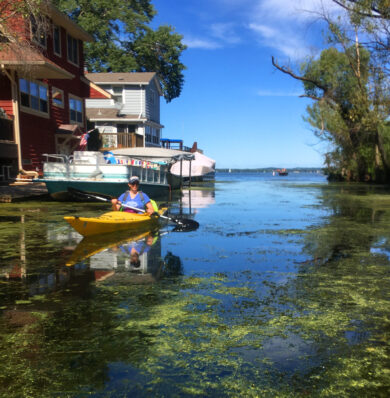 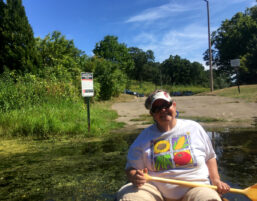 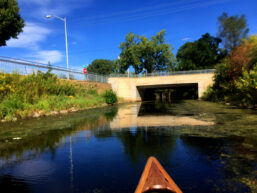 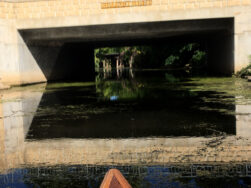 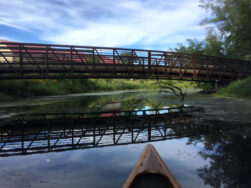 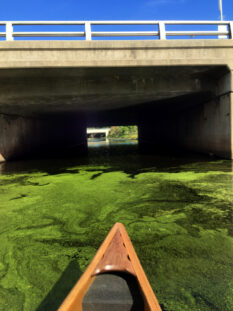 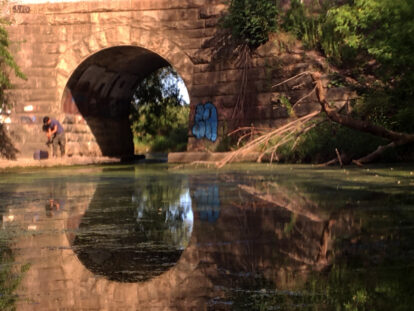 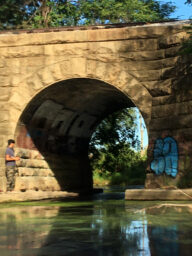 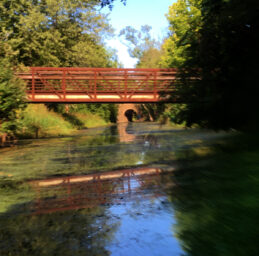 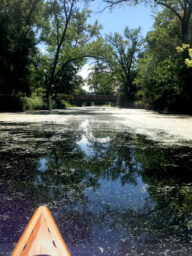 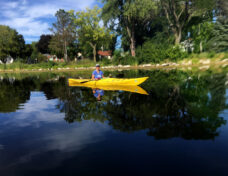 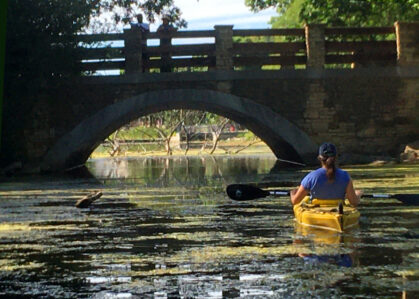 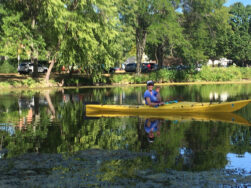 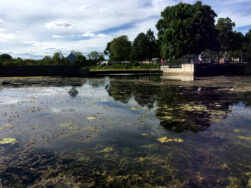 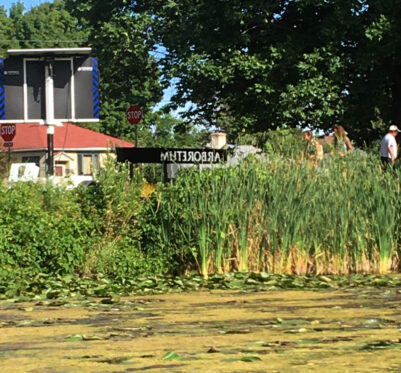 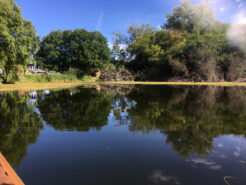 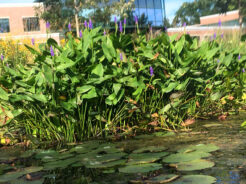 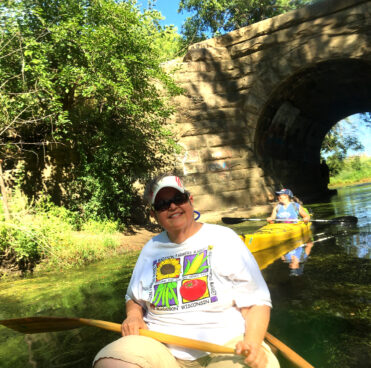 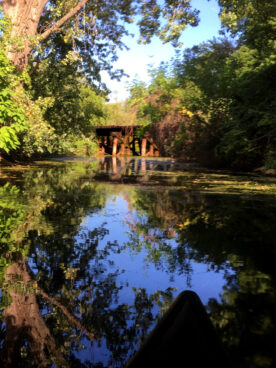 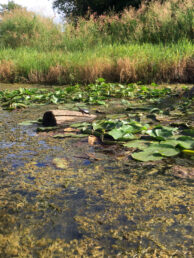 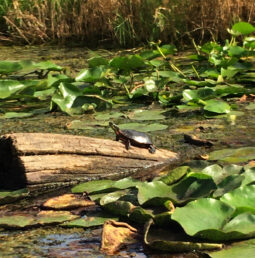 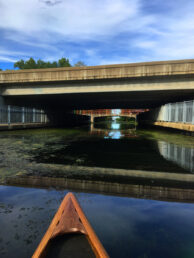 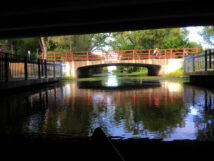 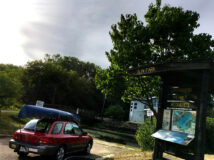 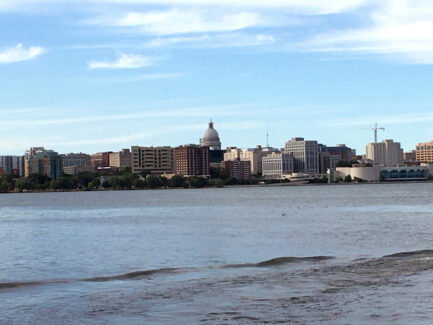