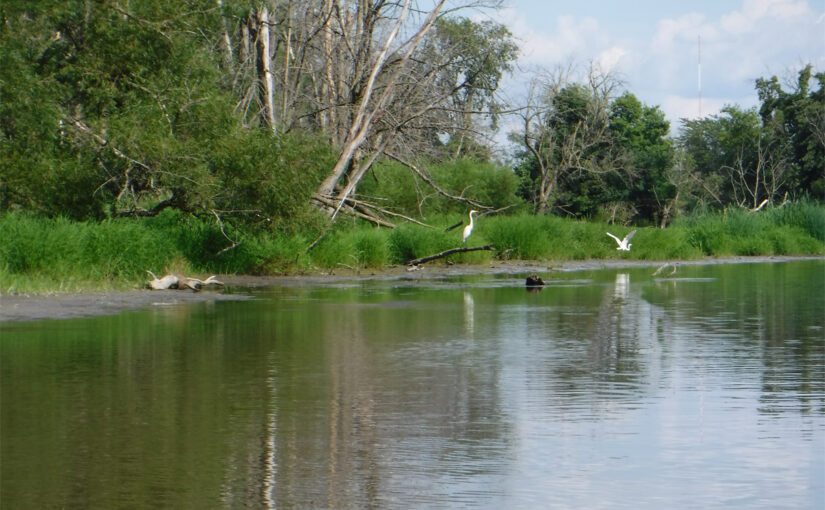 Knowing the paddle could be a huge disappointment (it was not), we went anyway. It feels like something is missing if we don’t get on the Bark River.

The flow was reported as very low (10th – 25th percentile). We would not have attempted paddling, but just so happens that earlier in the week Deb had a visit with her brother and sister on Lake Delavan; and Fort Atkinson is on the way home when gps is set to “avoid highways.” She stopped at Burnt Village Park to check out the river and was happy to report that yes, the water was low, but there was no sign of major algae problems at Burnt Village upstream or down.

So yes, the water was very low, the lowest we have seen it at the launch ramp. As we were preparing our “stuff” another car came along, and we started chatting with they guy (and his dog). He was very familiar with the “weed bog” we encountered a couple of years ago. It was so thick and horrible that we had to retreat and paddle back upstream to the put-in to disembark. He said that he cut a pathway close to shore so people could get through it. (He also said that he saw a female kayaker tip over it it – ew!) Unfortunately, Mary and I both have a different impression of whether the algae bog is still there and if it can it be safely crossed this year. We might try to approach it from the north and see how far south we can paddle. For that, we wouldn’t need a second boat companion to shuttle.

At Burnt Village park boat ramp, there is a sign that reads “Glacial Heritage Area – Watertrails” but we have yet to find any useful information about it for paddlers.

We miss the Bark River – it’s been our default place to go over the years (more than posted to this paddling blog), but it has had degradation due to algae and invasive weeds. We had trepidation upon launching because of the low water level. Indeed, at times our paddle “hit bottom;” but we didn’t get stuck and – nothing bad happened.

We had the river all to ourselves except for the wildlife. There was rarely a moment when a bird was not in our sightline. It has been rare for us to see green heron, for example, and on this day we saw about ten of them – probably some were juveniles in that they were hanging out together.  There were also a lot of white egrets. They were flying ahead of us but also were congregating on a particular tree. We saw belted kingfishers, sandhill cranes, an oriole, shore birds (with ringed necks), frogs, freshwater clams and lots of swallows (they always seem so jolly flitting around). On the Whitewater Creek we saw boodles of little small fish – again it seems like hyperbole but it was more fish than we have ever seen.

When we got to the bridge that marks the confluence of the Whitewater Creek we were tempted not to paddle in because to our recollection, the water is shallow. So we crept in “just to see” then went a little farther… a little farther… until a downed tree blocked the entire creek. There is almost always accidentally on purpose a tree across that creek; whoever owns that farm does not want people exploring.  We could have portaged around it but decided we had much to explore on the Bark so just turned around. We noticed on the way out how incredibly clear the water was on the Whitewater Creek. The Bark is murky so to have this connected channel clear was stunning. As we re-entered the Bark we watched the clarity diminish.

We were oh so sad to have to turn around. There was very little current to carry us effortlessly back downstream, so, unlike some paddles, the return  was “exercise;” and we didn’t want to risk being exhausted… we aren’t getting any younger.

Instead of going directly home, we veered over to Princes Point to see how the river looked there.  To us it looked really low, especially when we reminisce about the time the Bark was so flooded we had to paddle through the parking lot. In the parking lot there were trailers for larger fishing boats parked. I surmise it shouldn’t be a problem for a canoe if motorboats can use the river and not get stuck. 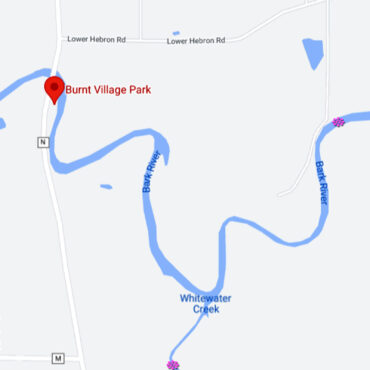 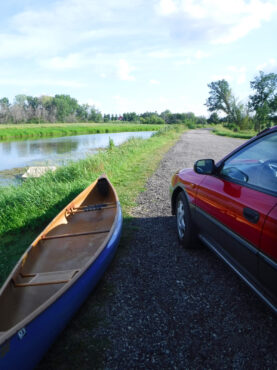 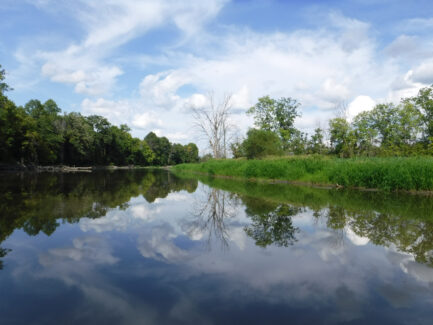 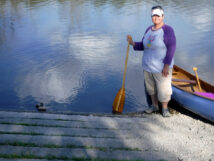 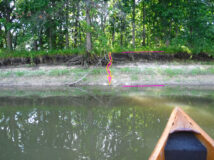 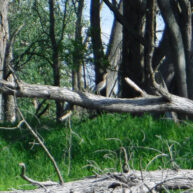 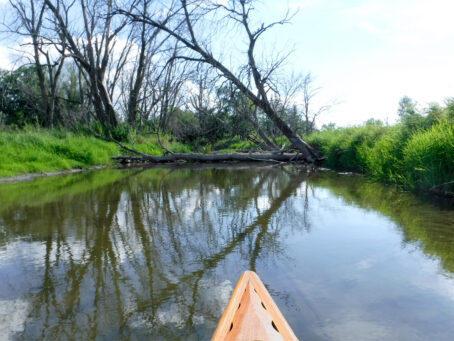 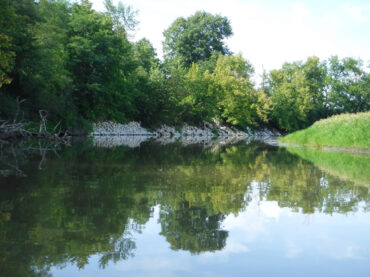 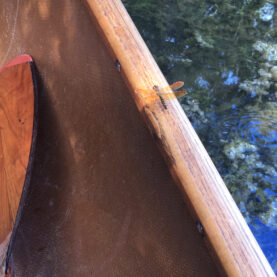 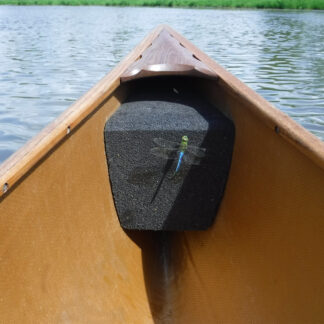 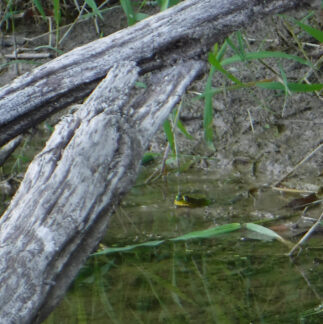 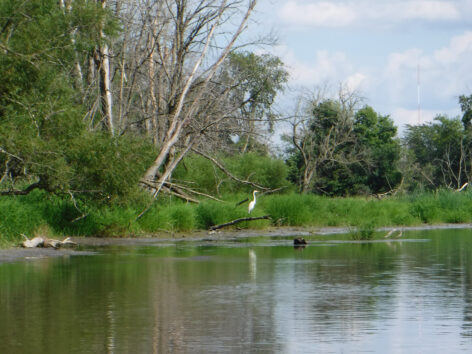 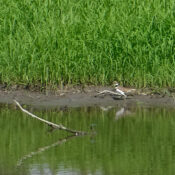 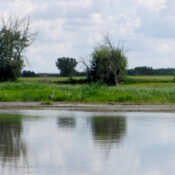 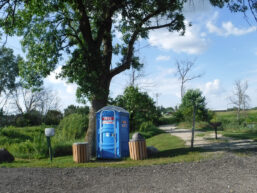 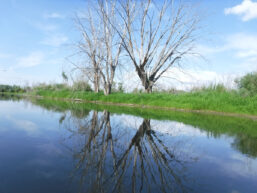 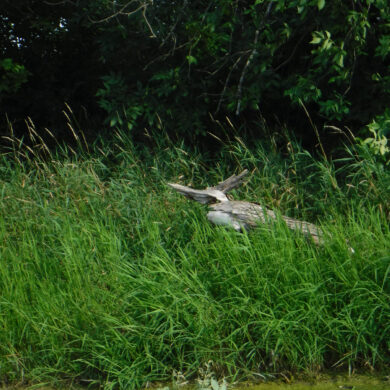 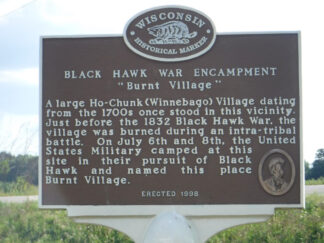 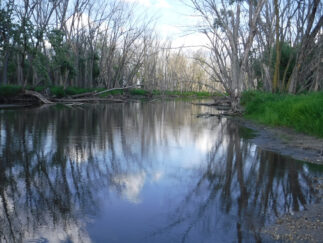 Who cares about the Bark River?

We have yet to find a website discussing this river’s health. There seems to be no “friends of” group or anything close. Deb did contact a Facebook page called “Bark River” but they didn’t reply (looking at you, Bark River Campground).