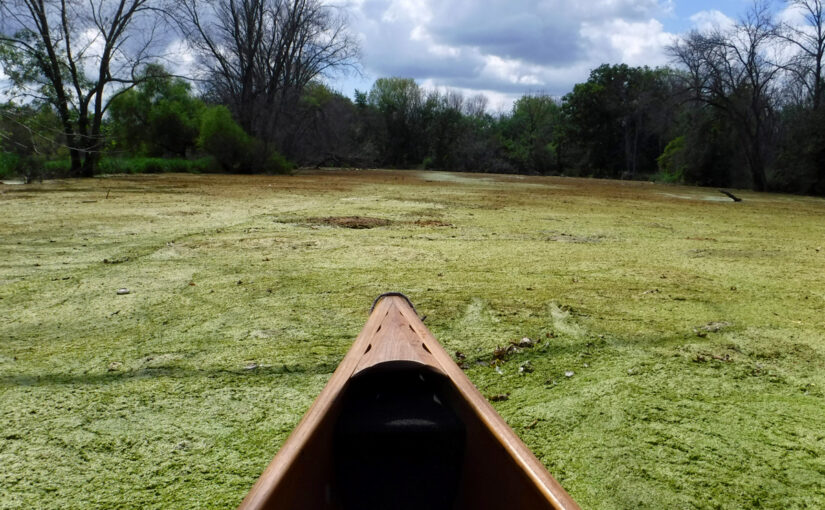 We planned to paddle to the confluence of the Rock River but a duckweed / muck area made us turn around from whence we came.

In a future paddle, we might try to enter at the Rock River and go upstream to the blockage to see how big it is. We didn’t know if somehow we slogged through it (not sure we could) we would run into more, so we retreated.

Deb was so excited to get reunited with the Bark River in Fort Atkinson. Historically, this was our go-to river when we didn’t know where else to go, because our saying was “The Bark River never disappoints.” Unfortunately some algae/ scum/ duckweed problems started a couple of years ago so we have been going less and less.

So here it is, the summer of 2020 which had nice rains and our other waterways looking mighty clear, so we decided to try the much-missed Burnt Village Park to the Rock River route since we had a second car to do the shuttle. The day was beautiful.

We were amazed at how much water there was. Places that used to be shoreline, places that used to be “islands” were now firmly established as part of the river. So many trees have been in the floodwater so long that they were dying. Our photos look like it’s fall but it was the height of summer – all should be lush and green.

We were marveling at the increased water volume and were delighted with the many egrets and other wildlife sightings, but then our enjoyment came to a dead stop. There was a huge weed / muck blockage as far as the eye could see. Thinking we must have made a wrong turn, we checked the GPS to make sure we were in the main channel – we were. There was no way to portage around it, so we tried to paddle into it; but it became quite difficult as soon as the full length of the canoe was into it. We were concerned we’d slug half way through it and either we or our friend in a kayak would not have the strength to push through. Also there was no way to know if this was the only blockage between us and our destination. We decided we’d best turn around and exit where we put in. It was a bummer, but paddling against the current is not very difficult on the Bark River.

On the way back to the put-in, we encountered two young guys in kayaks heading for the Rock River; and we let them know about the muck blockage. We will never know if they were able to get through it or not as we never caught sight of them again.

The Put-In turned into the Take-Out

Burnt Village county park is very nice. It has a concrete ramp but it also has nicely maintained side-gravel edges that are inviting to use. There is no longer a porta-john at the park (? due to covid-19). The intended take out at the Rock River is not a designated boat area but it looked easy enough; lots of people fish there.  We didn’t take photos of that area. By the way, Bark River Road is a designated Wisconsin Rustic Road #84 – it’s very pretty. 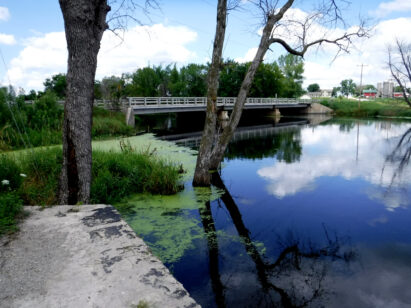 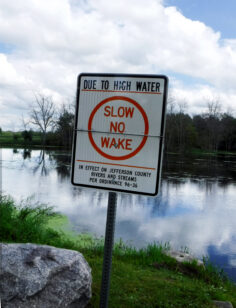 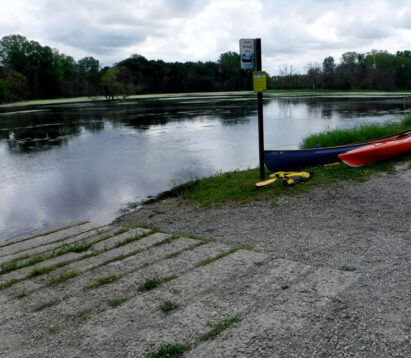 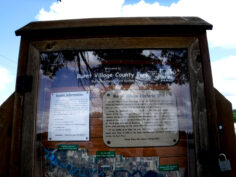 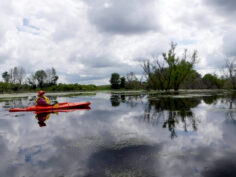 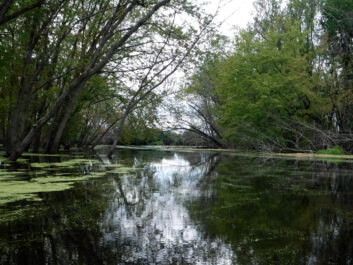 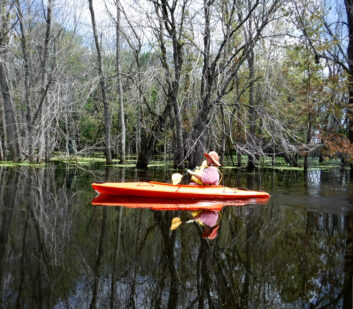 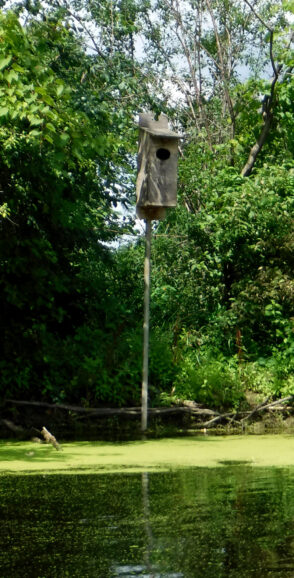 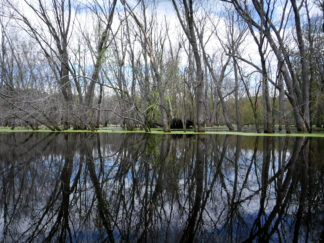 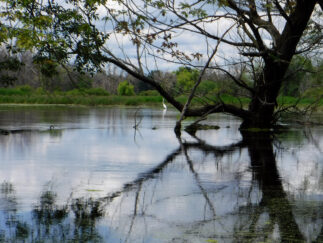 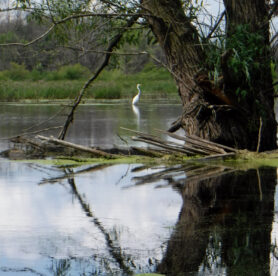 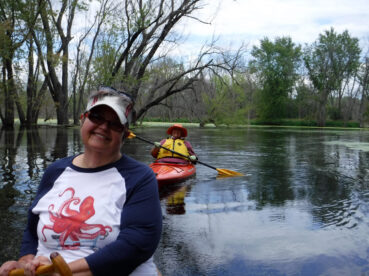 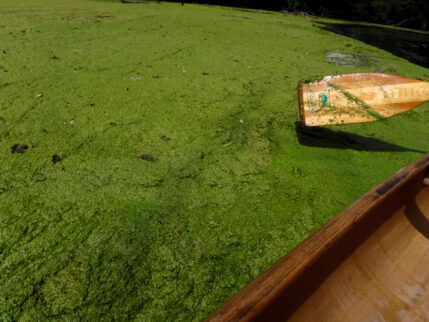 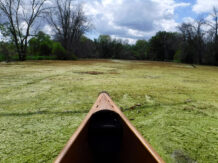 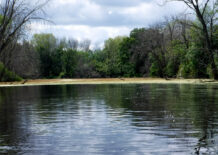 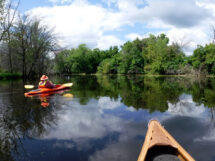 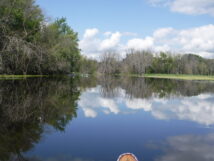 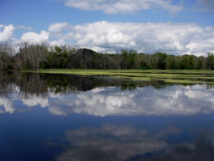 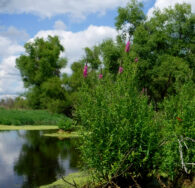 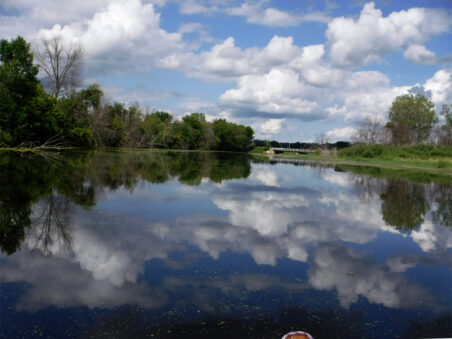 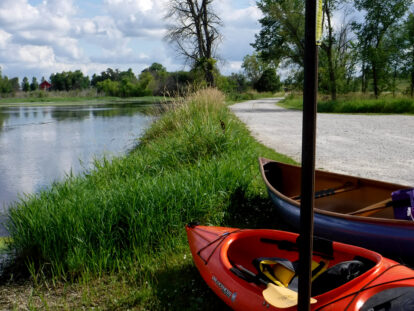 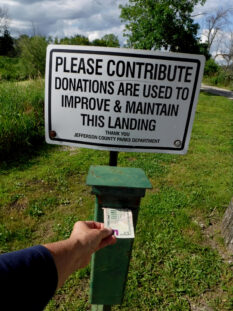 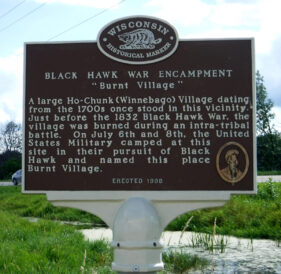 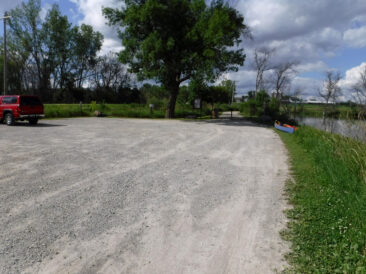 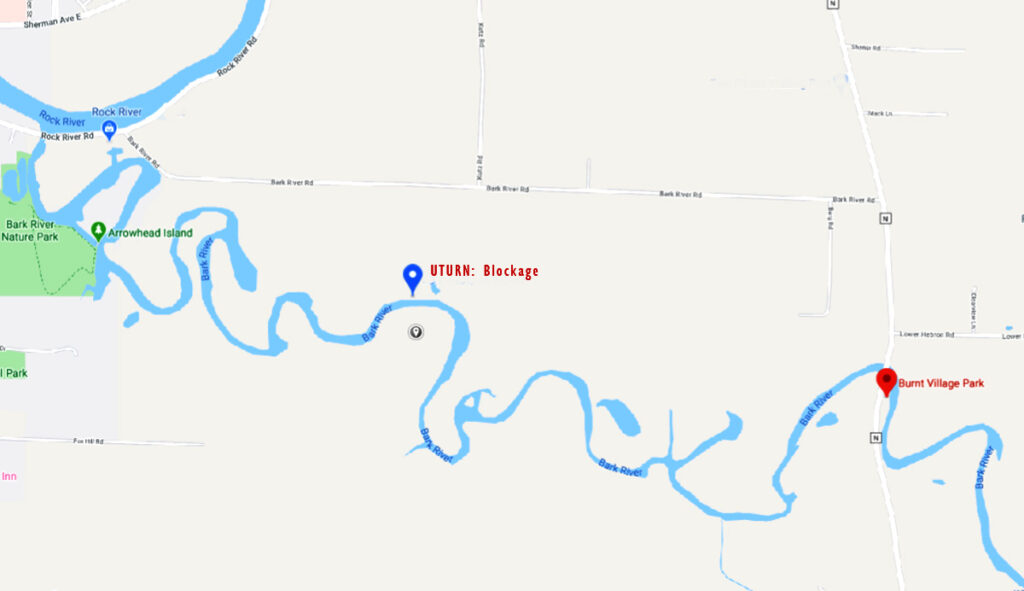