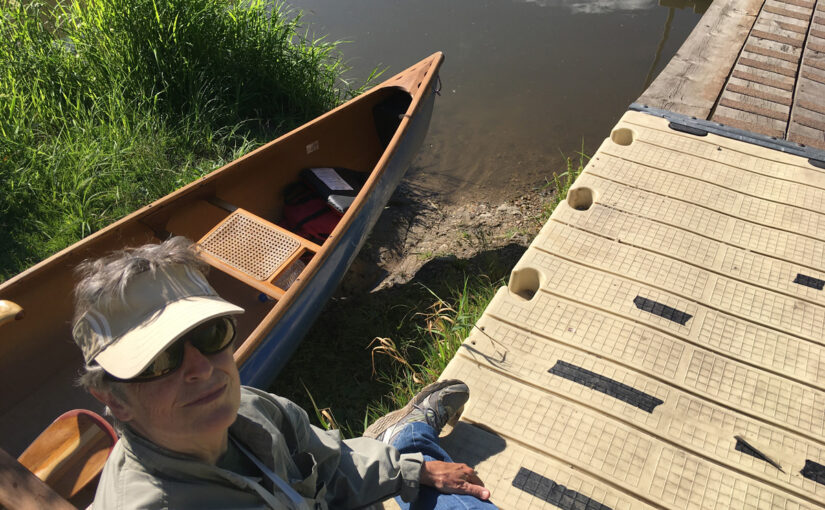 Inspired by posts in the Facebook group Paddle Wisconsin, we decided to try parts of the Crawfish River we hadn’t realized were canoeable. So, after researching various options on wisconsinrivertrips.com, we set out for Astico Park near Columbus for a no-shuttle paddle and a bit of recon on a warm sunny late June afternoon. An added bonus – we can get there in about 40 minutes from Madison, as opposed to the minimum 1-hour drive required to get to most places we paddle.

After a 40 minute drive via US 151, we arrived at Astico County Park entrance off County TT. We drove through the park before launching and noted that it was quiet and not crowded. This was a Wednesday, and we wondered if the situation would be quite different on a weekend with more people and more beer. We made note of some scenic picnic sites for future reference – perhaps a mid-week picnic dinner and short paddle in the early fall.

We spent part of the day checking out other accesses. On the way to the park, we stopped at the Ninabuck bridge upstream from Astico Park. This access point is “not for us.” We couldn’t see a clear path to the water, and the shoulder is too narrow to park safely in our opinion.

On the river, at the turn-around point just before the Danville Millpond – and I do mean “just before” (about 10 feet), there is a sign pointing to a Take Out. It was rocky and didn’t look like an access we could use, not to mention I believe it is on private property. We tried to see if we could find that takeout from Bassett Rd, a dead-end road off County T, after the paddle; it wasn’t obvious where it was, although others have talked about using it.

We briefly drove around Columbus to see if we could find the landings others have used (Udey Dam, waste water plant), but we didn’t spend much time looking since the stretch from Columbus to Astico Park looks from the videos to be beyond our skill level, with log jams and swift current. Very scenic, though, and others love it.

There are other accesses nicely documented in wisconsinrivertrips.com. For example: “Alt Access – River Road
The road crosses a bridge here and the below creek should be an access option for the Crawfish. May be a bit tricky during low water though.”

We also saw places in the park near some of the rustic tent campsites that looked like potential put-ins or take-outs.

The main Astico Park entrance is just south of Hwy 60 (N3620 County Road TT – Columbus, WI 53925). The 3-car parking area and the put-in are just inside the main entrance. There are restrooms nearby – we didn’t check to see if they were open. This apparently varies from county to county or park to park. We did notice that the drinking fountains were covered with plastic bags. Canoe and kayak rentals are usually available but not at this time due to coronavirus.

Apparently, it is expected that most people will use the dock to launch at this landing; and someday we will learn how to get in and out from a dock, and this will greatly expand our launch options. Meanwhile, we noted a canoe-bow-shaped depression in the bank next to the dock which reassured us that there are other people afraid of dock launching. The incline was a little steeper and less “ADA-compliant” than we would have liked and probably could be pretty muddy and slippery in wetter conditions, but – inspired by president’s West Point ramp walk – we went for it and were soon on the water.

We put in at 3:40 and floated downstream almost to the Danville Mill Dam, where we turned around and paddled back upstream, taking out at 5:00, about a 3-mile trip.

The river was murky and wide with minimal current. Where the current was most sluggish, there were small patches of duckweed. There were no obstructions, and the water was always deep enough not to hit bottom except along the shore where our paddles occasionally dipped into the mud. It was easy to avoid the few submerged logs and limbs and one rock that would be more visible at lower water levels.

Along the stretch on the west side of Astico Park, there is a small wayside park with an artesian well and picnic tables – no hospitable boat landing area that we could see. The banks along Astico Park are wooded with an occasional opening for a bench or picnic table or campsite. The road noise is bothersome but pretty much disappeared after rounding the northern point of the park. There are several places along this end of the park where it looks feasible to slip a boat into the water. Along the eastern edge of the park, the banks are mostly wooded to the west and partially open on the east, the section of the park with hiking loops.

You paddle under an interesting historic bridge which was moved a few years ago when the new Ninabuck Road bridge was built. There is a fishing pier next to the bridge – no canoe access here for us. There is an east entrance to the park here, open April to November, off County Highway T.

We considered passing up the takeout and continuing upstream toward the Ninabuck Rd bridge, but the sun and dew point had taken their toll, so we left this for another day.

Overall, we thought this slow quiet paddle was fine except for the section with road noise. And a heron sighting makes almost any paddle worthwhile. 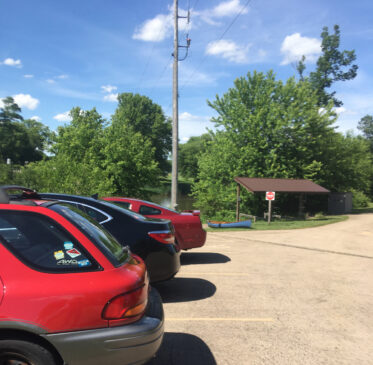 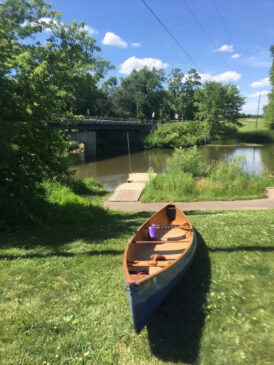 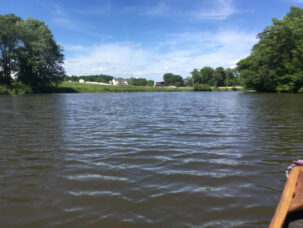 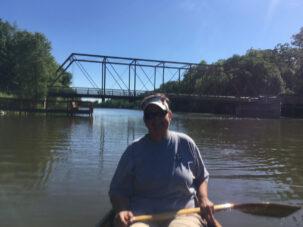 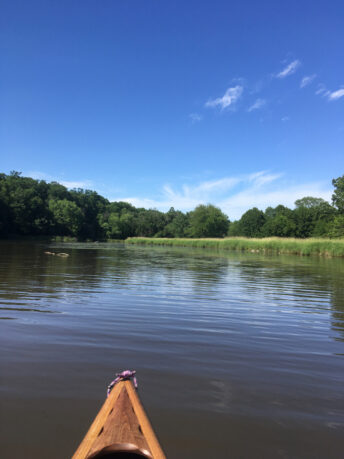 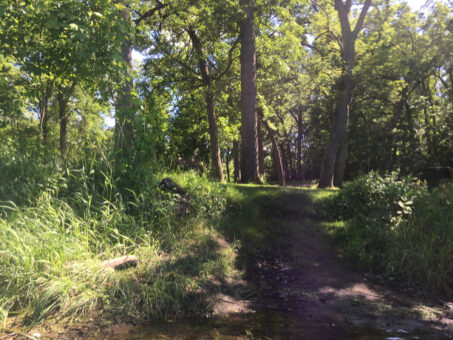 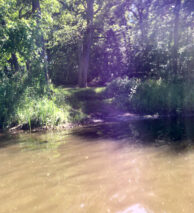 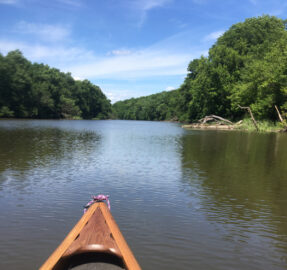 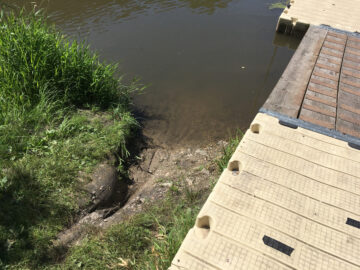 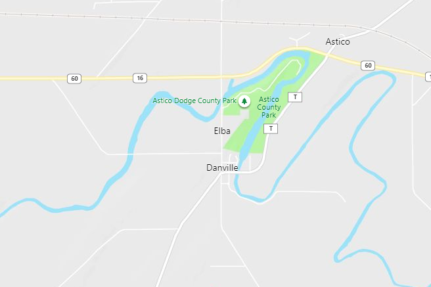 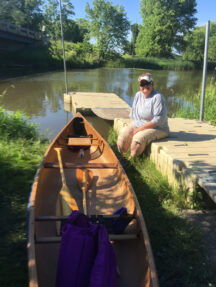